For the past 9 months I’ve been working non-stop to design and create my debut collection of modern silk scarves. I’ve still got a long way to go, but this week I received two small packages from my UPS courier that made me do a little happy dance. Well TWO happy dances actually, one for each delivery.

The first parcel contained my Cheekytree brand labels that will be sewn into each scarf. The second contained a strike-off, a sample of my design custom printed onto silk.

Now the contents of these two packages may not sound that exciting to you – but to me, they are evidence that my little dream is slowly becoming a physical reality.

My friends and family are very supportive. They enthusiastically ask me all sorts of questions. At first I was a bit defensive because I didn’t have all the answers. I still don’t. If I stop to think about everything I need to do, I can feel overwhelmed. So my strategy is to concentrate on what needs to be done today. The rest I add to my to-do list.

My efforts have been focused on creating a collection of scarves that I’d want to wear myself. The designs must be modern, playful and above all, beautiful. Timeless not trendy. Classic but a bit quirky too. They must be unique; unlike anything I can already buy. They must be made to last, not just for this season but for years to come. A collection that’s sensitive to the environment and keeps Mother Nature smiling.

I’m inspired by the words of French film director, Robert Bresson (1901-1999) who was often described as a “painter” of films in a category all their own:

“Make visible what, without you, might perhaps have never been seen.”

As I take flight into unfamiliar territory, I’m determined to enjoy this exhilarating ride. Sure it’s a little scary at times, but it’s the unknown that makes it exciting. 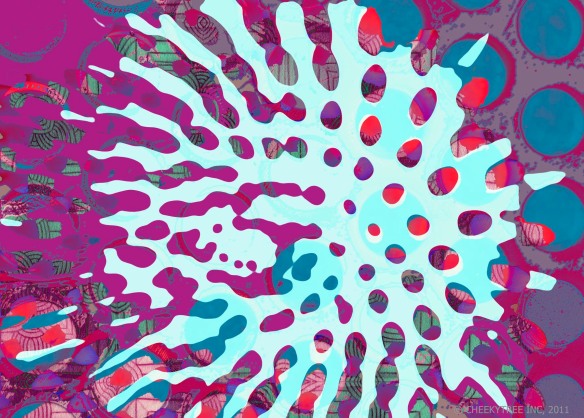 These are just a few of my beliefs on life and happiness. What are yours? If there’s something you’d like to add, please post a comment. 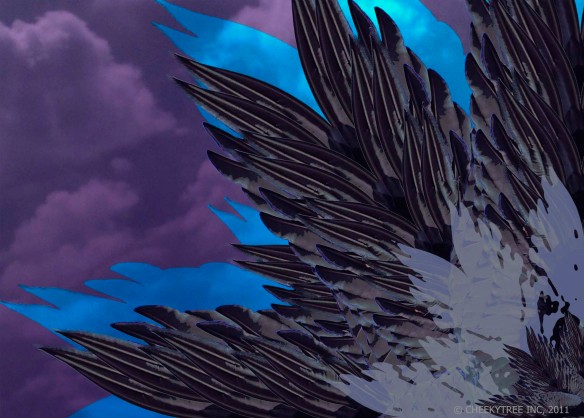 I’m a pesco-vegetarian. So for the past 16 years I haven’t eaten any meat other than fish. That’s right, no turkey on Thanksgiving, no BBQ steak in the summer, and no visit to KFC to try the infamous Double Down. But on Saturday I had to eat crow.

Earlier in the week I called my sister just to chat. I asked how she was, listened for a minute or two, and replied with a spontaneous well-intended remark. She normally loves my spontaneity. We share a similar sense of humour and on a good day, she thinks my impulsive comments are witty. On a brilliant day, she thinks I’m hysterical. But on this day, she wasn’t laughing.

Everyone knows that to tell a good joke, timing is key. And an insensitive comment spoken at the wrong moment is like an angry wasp — it can sting many times.

And once you say something, you just can’t take it back.

So what did I do? Apologize profusely? Beg for my sister’s forgiveness? No, I became defensive. (This makes things worse). And our phone call quickly ended with two abrupt good-byes.

If you ‘eat crow’ it means you have to admit that you were wrong about something. I knew I was wrong. I felt guilty. She deserved an apology but it wasn’t going to be enough to just say: “I’m sorry”.

She was out-of-town on business, so for the next few days I thought about why I was sorry. My comment was critical. And my choice of timing made an otherwise insensitive remark even cruel. But the thing I felt most apologetic about, was hurting someone I love.

On Saturday, I typed a note with talking points so that I would remember all the things I wanted to say. I took a deep breath and dialed the phone. It rang. She answered and I began with: “I’ve called to apologize.”

I admitted I was wrong. I ate crow and it was tough at first, but my sister was receptive, and that made it easier. I think she was as relieved to hear my heartfelt apology as I was to say it. After it was over, we briefly chatted about other things, and this time our call ended in our usual way: “bye, love you”. When I hung up the phone, I felt like everything was right again.

‘Eating crow’ is not something I’m particularly proud of, but making things right, well that’s ‘something to crow about’. 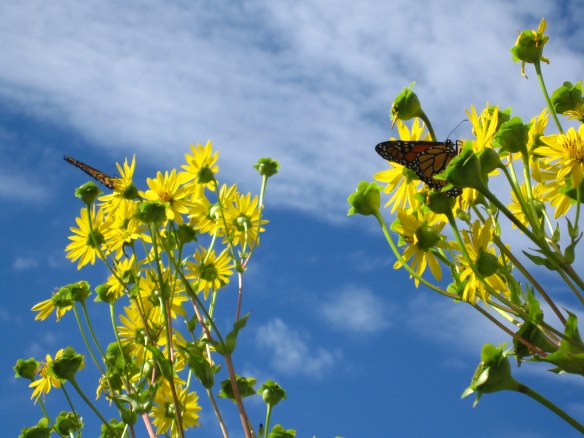 On Sunday morning I went for a walk in High Park.

Along a winding dirt path, I stopped to photograph a simple yellow flower when a butterfly flew into frame. It was only then that I looked up, way up, and noticed dozens of orange and black butterflies fluttering high above me. They were beautiful.

For me, the image I captured on that sunny morning evokes feelings of lightness and joy; just two of the many uplifting things the butterfly symbolizes in cultures around the world.

I hope this week you’ll go outside and see for yourself all the beauty in Nature that surrounds us. Soon! Before the weather gets cold.

Have a beautiful week.

Have you ever had a mentor? Some of the best mentors I’ve had in life are people I’ve never even met; people who have shared their experiences and wisdom with me by writing a book.

One mentor of mine is Derek Sivers the author of Anything You Want. This book is for entrepreneurs, but his simple, very direct advice can be helpful to all of us who want to feel excited about work and life.  This quote from Derek really made me stop and reflect on my own little distractions:

“Don’t be on your deathbed someday, having squandered your one chance at life, full of regret because you pursued little distractions instead of big dreams.

You need to know your personal philosophy of what makes you happy and what’s worth doing.”

So how can we tell what’s really worth doing?

Derek suggests that when we’re deciding to do something, if we feel anything less than “HELL YEAH!” about it, then we should simply say “no”.

Sure, I know that’s not so simple. We all have things in life we must do that aren’t exactly thrilling:

But there are lots of things we commit to doing, just because that little voice in our head tells us “I should”.

I wonder. If we busy ourselves doing all the “right” things, that in the end leave us feeling frazzled, who are we really making happy?

We can’t please everyone in life, so at the very least, please yourself. Now that’s something I can emphatically say “HELL YEAH!” to.

Is anyone with me?